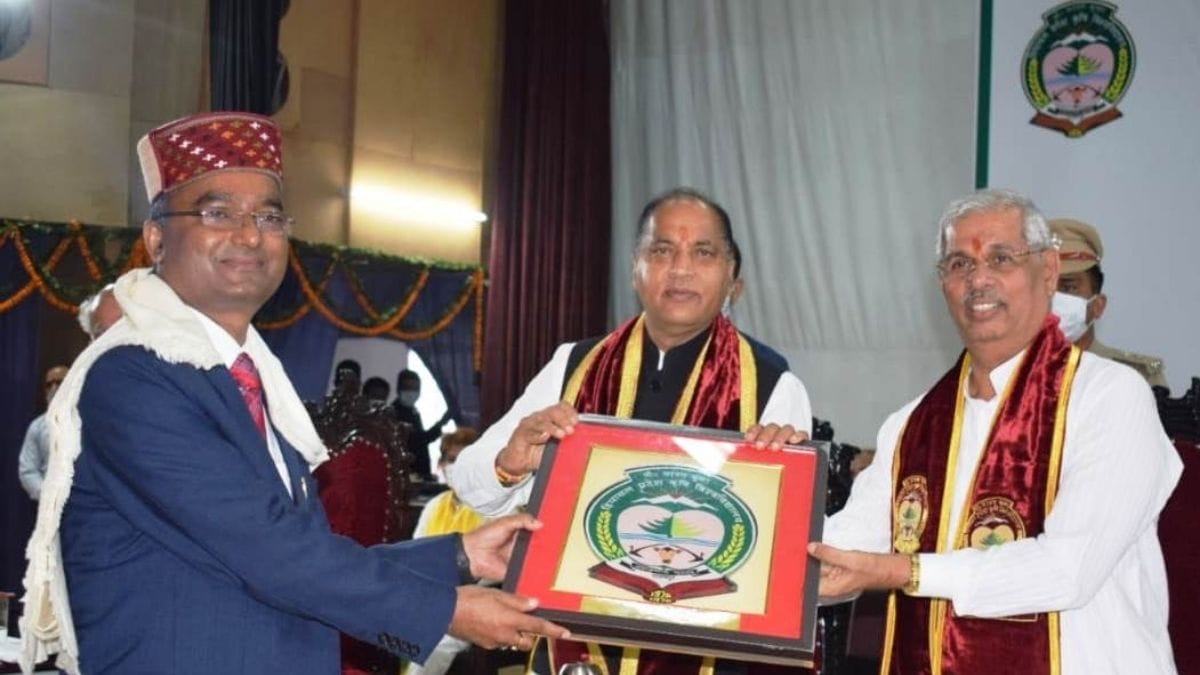 The Governor, as Chancellor of the University was presiding over the 16th Convocation function of CSK HP Krishi Vishvavidyalaya (CSKHPKV), Palampur, a premier agricultural university of the country.

At the impressive function the Governor also presented a Scroll of Honour to the distinguished alumni of the University.

Shri Nand Lal Sharma, an Alumini of the University, was honoured for his outstanding contributions in Administrative Services and in the Power Sector and his dynamic leadership in heading SJVN as Chairman and Managing Director of the Central Government Public Sector Undertaking of Ministry of Power, Govt. of India.

Born in an agrarian family, on 12thFebruary 1964, at Dohak village in District Bilaspur of Himachal Pradesh, Shri Sharma after completing school from Government Senior Secondary School Lathiani (District Una), did his B. Sc. (Agriculture) from the then College of Agriculture, Solan in 1985. He completed his M.Sc. in Agricultural Economics from CSK HP Krishi Vishvavidyalaya, Palampur in 1987. Sh. Nand Lal Sharma has also done a Master’s in Business Administration (MBA) from International Centre for Promotion of Public Enterprises (ICPE), University of Ljubljana, Slovenia (Europe).

Sh. Nand Lal Sharma started his career in 1989 as a Himachal Pradesh Administrative Services Officer.  He worked in various capacities with the Himachal Pradesh Government before joining SJVN as Executive Director-Human Resources in July 2008.

Selected through an All India Open Competition by Public Enterprises Selection Board (PESB), Shri Sharma was appointed Director (Personnel) SJVN in March 2011. During his tenure as Director (Personnel), he initiated and successfully established several Human Resource interventions that have achieved outstanding performance for SJVN in remodelling of its business plan.

Taking charge as CMD in December 2017, Shri Sharma had been in the forefront of turning SJVN into a diversified multinational power company with operation and construction of projects in India, Nepal and Bhutan. Starting out as a purely hydropower company, with Sh.Sharma in the leadership SJVN today has ventured into Thermal Power, Wind and Solar energy generation, and into electricity transmission also.

Speaking at award ceremony, Shri Sharma said, “It truly humbles me to be honoured in such a way at the University where once I strived hard as a student.”

About his contribution to the power sector and leadership in spearheading a Mini-Ratna Public Sector Company, Shri Sharma said, “leadership is a great responsibility and one has to lead from the front just as the famous American writer John C Maxwell says ‘A leader is one who knows the way, goes the way and shows the way’.”

In his address Governor Sh. Arlekar congratulated all the recipient degree holders’ meritorious students and urged them to serve the state and country in a selfless manner.

Other dignitaries who attended the function included Speaker Himachal Pradesh Vidhan Sabha Shri Vipin Parmar as Guest of Honour and Minister of Agriculture, Animal Husbandry and Fisheries, Rural Development and Panchayati Raj Shri Virender Kanwar as Guest of Honour, Chief minister Jai Ram Thakur as chief guest had released three books, one compendium and one report on the occasion.

Earlier, Prof. HK Chaudhary, Vice-chancellor CSKHPKV, welcomed and honoured the Governor and other dignitaries on the occasion. He also read out the annual report of the University, detailing the strides the institution had made in the concluded academic year.

Aayushi is a third year Journalism and Mass Communication student, and is currently working as Sub-editor at dailyindianews.com

Tech Mahindra Partners with EdtEch startup CareerLabs to transform over 3000…