Harpercollins is proud to announce the upcoming release of The Anarchist Cookbook: A Toolkit to Protest and Peaceful Resistance by Aakar Patel Illustrations by PenPencilDraw

NEW DELHI, Sept. 26, 2022 /PRNewswire/ — In the present scenario, people all across the globe are participating in democracy in deeper and more meaningful ways. From India to the United States to Hong Kong, democratic societies have seen movements that have brought about change. They have one thing in common: large scale participation by civil society and individuals and the absence of organised political parties. 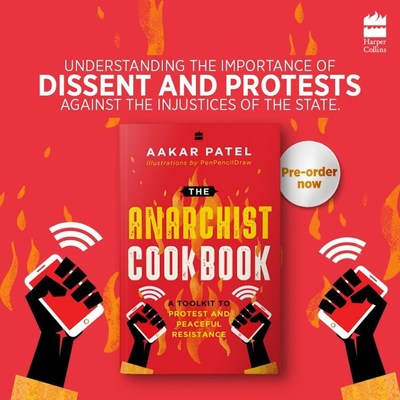 How can individuals make their participation more effective? This book talks about ways in which the best campaigning organisations in the world effect change in democratic societies, how a citizen can engage with others who are like-minded, and how vibrant and participative action by citizens makes democracy better and more responsive.

Featuring political cartoons that have the power to inspire, outrage or amuse, The Anarchist Cookbook is a book for our times.

According to the author, Aakar Patel, “Democracy doesn’t end at the ballot box. Voting is only one aspect of citizen participation in influencing government. There are other powers our constitution has given us with, that are often unused, and certainly more unused than the vote.

If you are troubled by what you see around you in the world, this book helps you take agency and act in a way that is effective and has worked around the world.”

“The Anarchist Cookbook is an urgent call to all citizens of India to do more to ensure a vibrant, healthy democracy. Aakar Patel, in his inimitable way, brings to us the most urgent issues of our times and tells us what we can do, as Indians, to truly exercise the rights granted to us by the Constitution. A must-read for all those who care about India and are troubled by its recent descent into authoritarianism,” says Swati Chopra, Executive Editor, HarperCollins India.

“India is rich in material for artists, especially during times like now. We have tried in this book to communicate through visuals some of the paradoxes and absurdities we see before us,” says the Illustrator, PenPencilDraw

Aakar Patel is a writer and human rights activist based in Bangalore. He is chair of Amnesty International India.

PenPencilDraw is the Instagram handle featuring illustrations by an anonymous satirist.

HarperCollins India publishes some of the finest writers from the Indian Subcontinent and around the world, publishing approximately 200 new books every year, with a print and digital catalogue of more than 2,000 titles across 10 imprints. Its authors have won almost every major literary award including the Man Booker Prize, JCB Prize, DSC Prize, New India Foundation Award, Atta Galatta Prize, Shakti Bhatt Prize, Gourmand Cookbook Award, Publishing Next Award, Tata Literature Live! Award, Gaja Capital Business Book Prize, BICW Award, Sushila Devi Award, Sahitya Akademi Award and Crossword Book Award. HarperCollins India also represents some of the finest publishers in the world including Harvard University Press, Gallup Press, Oneworld, Bonnier Zaffre, Usborne, Dover and Lonely Planet. HarperCollins India is now the recipient of five Publisher of the Year Awards – In 2021 and 2015 at the Publishing Next Industry Awards, and in 2021, 2018 and 2016 at Tata Literature Live. HarperCollins India is a subsidiary of HarperCollins Publishers.

Disclaimer: The above press release comes to you under an arrangement with PR Newswire. Daily India News takes no editorial responsibility for the same.

PR Newswire is a distributor of press releases headquartered in New York City.