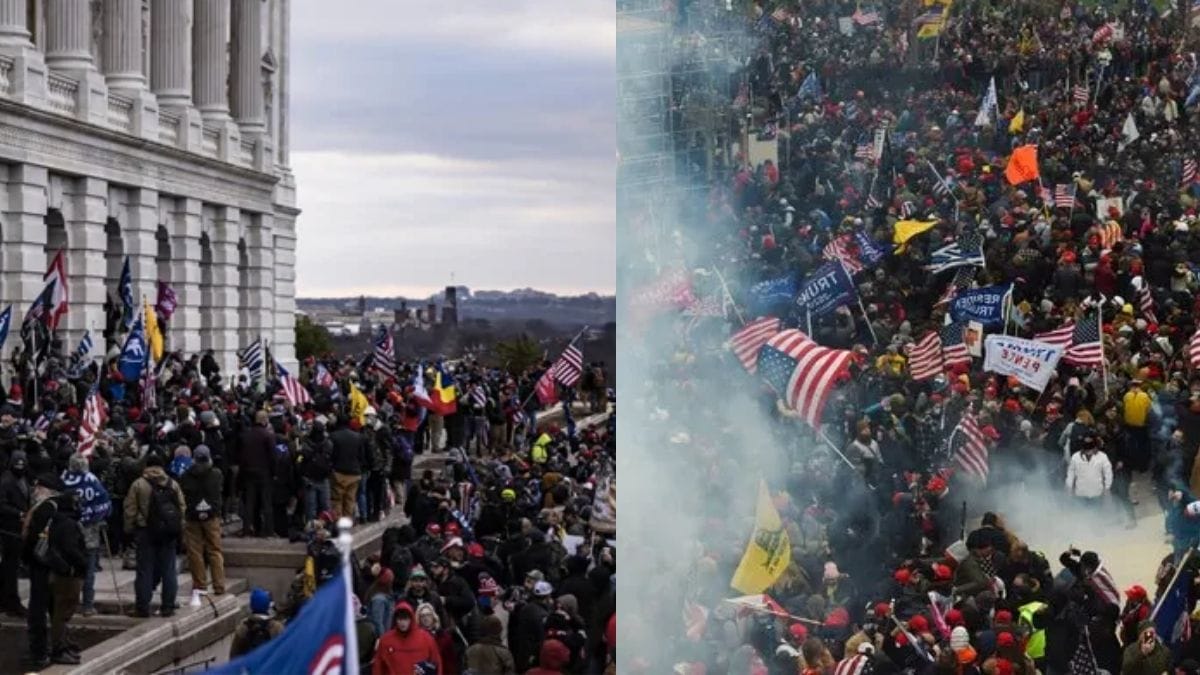 The Capitol in Washington was reportedly attacked by President Trump’s supporters. Thousands of people pushed past the Capitol police and the S.W.A.T team present, who were trying to stop them from entering the building. A mob was successfully able to breach the security and enter the building. As a result, a woman was shot, who later died.

What led to this attack on the Capitol?

A day starting with thousands of supporters of President Trump in Washington demonstrating soon turned into a horrifyingly violent one after many present in the Wednesday rally saw it as the last chance to stand for Trump. This was because Congress was set to confirm President-elect Joe Biden as the winner of the election.

Trump, who lost the 2020 Presidential election, has continuously been in disagreement with the results and has encouraged his supporters to take part in rallies. At around noon, he took to the stage and falsely claimed that he won the election. He further went on to call on Congress and ask Vice President Mike Pence to “stop the steal”.

Trump went on to say to his supporters that he won’t give up. He demanded Pence to reject the Electoral results, something Pence is legally incapable of doing.

Things got worse when a throng of crowds attacked the Capitol.

What doesn’t make any of this better are the posters on websites and social media platforms, especially the ones popular with MAGA types, that were threatening violence after the rally if Congress didn’t make Trump the President.

How did the rally come together?

March for Trump on Wednesday was the third pro-Trump rally organized in DC. The rally was originally planned in late December by Women for America First and the permit for the same was filed.

Trump’s campaign since then has just become more aggressive. All he has focused on over the past month has been on delegitimizing the results, and how Democrats have stolen the election from the Republicans.

Trump has primarily focused on January 6 as the decisive day. He has successfully managed to convince a majority of House Republicans and quite a number of 2024 presidential hopefuls to support the challenge to the legitimacy of the election. Trump has gone as far as to pressure Pence, both publicly and privately, to unilaterally invalidate the election, which is something he cannot do legally.

Twitter and Facebook took certain steps to curb the spreading of misinformation and incitement of violence by Trump and his supports on their platforms after the attack on the Capitol. One of the steps taken was the locking of Trump’s accounts and removal of several posts that cast doubt on the election result.

Trump, in a video message on Wednesday, urged his supporters to be peaceful and to “go home”, all the while legitimizing the falsehood of the election and called the election “stolen”. 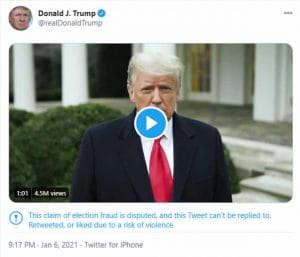 A Twitter spokesperson said, “In line with our civic integrity policy and recent guidance, we have placed a label on the tweet, and have significantly restricted engagement with the tweet due to the risk of violence.” He added, “This means this tweet will not be able to be replied to, retweeted, or liked.”

Facebook also took multiple steps, including the unprecedented decision to remove one of the posts made by Trump. “This is an emergency situation and we are taking appropriate emergency measures, including removing President Trump’s video,” tweeted Guy Rosen, Facebook’s vice-president of integrity. “We removed it because on balance we believe it contributes to, rather than diminishes, the risk of ongoing violence.”

Facebook has said it will remove all the posts praising the attack on the Capitol, along with calls to bring weapons to certain locations in the US, videos, and photos of protestors at the Capitol, and any “attempts to restage violence” in the near future. It has also banned the hashtag #StormtheCapitol.

What are the latest updates?

Congress has confirmed President-elect Joseph R. Biden Jr.’s victory on Thursday. This has come merely hours after the storming of the Capitol.

President Trump has said that although he disagrees with the result, he will respect it. He has also added that there will be an “orderly transition” on January 20, 2021.